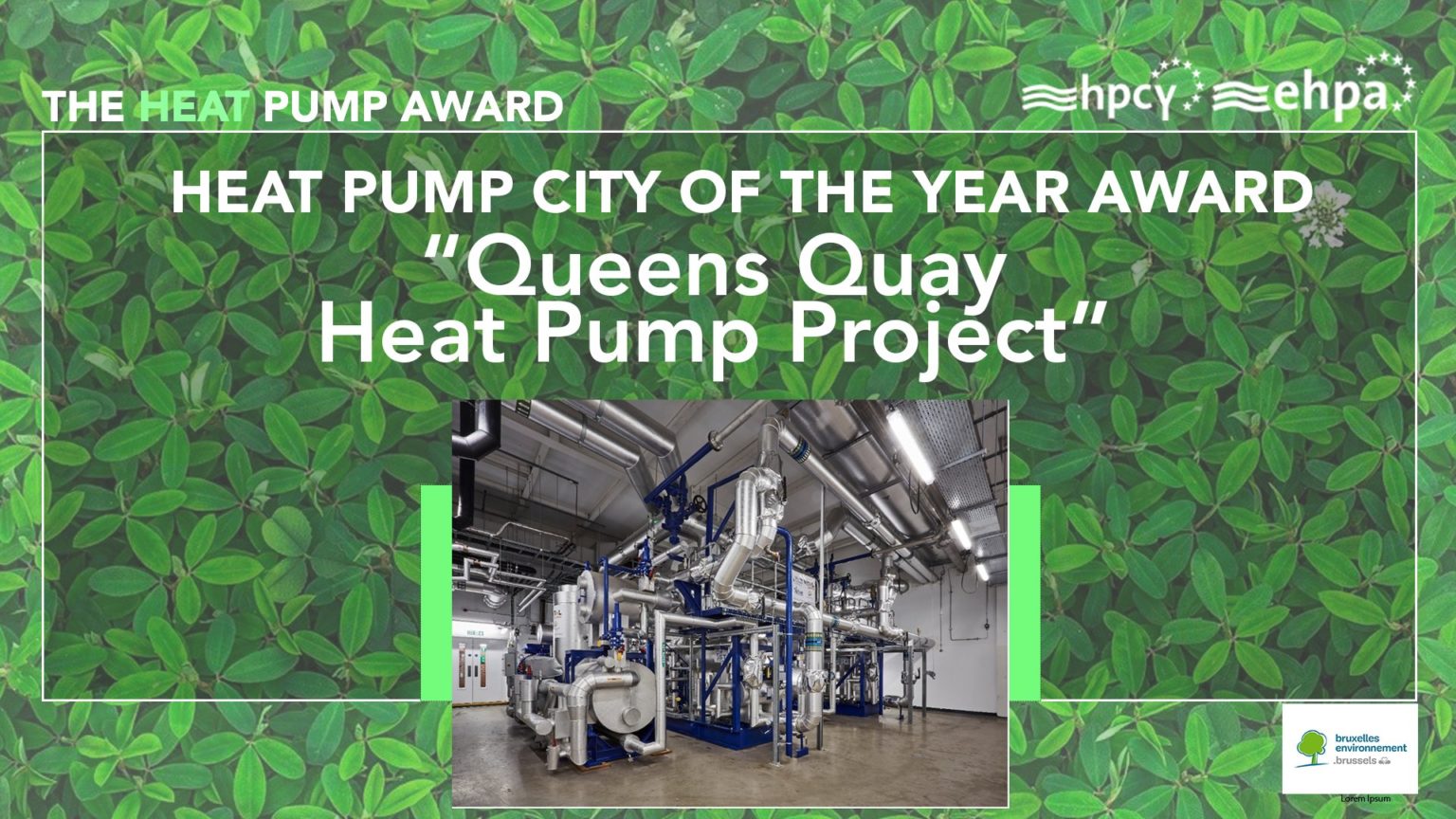 Star Renewable Energy’s supplied the heat pumps for Queens Quay district heating scheme in Clydebank which has been awarded a top accolade by the European Heat Pump Association (EHPA). Now in its eleventh year, the EHPA’s annual Heat Pump Awards recognise the most efficient, smart and sustainable heat pump projects across Europe.

Councillor Iain McLaren, Convener of the Council’s Infrastructure, Regeneration and Economic Development Committee, said: “This is a huge achievement and I want to say a big congratulations to the team for getting this recognition, which shows we are truly leading the way.

“This system is the first of its kind in Scotland and I am proud that West Dunbartonshire is using this natural resource to provide energy, not only to help us achieve our Net Zero targets, but also to support residents and help eliminate fuel poverty.”

Star engineered the heat pumps for the award-winning district heating scheme as part of the £250M Queens Quay regeneration project. The water source heat pump will provide low carbon heating and hot water to around 1,200 new homes and businesses in the area.

Star Refrigeration’s Group Sustainable Development Director, Dave Pearson, said “Water source heat pumps have been in use in mainland Europe for several years, but the Queen’s Quay scheme is the first large-scale, high temperature heat pump deployment in the UK.”

“We are delighted that the Queen’s Quay heat pump project has been recognised as leading the way in delivering low carbon district heating. West Dunbartonshire Council’s core objective was to invest in technology that would produce more affordable heating and hot water for the development’s businesses and residents, whilst keeping carbon emissions to a minimum.”

The heat pump system uses pioneering renewable energy technology to extract cold water from the River Clyde at a rate of 125 litres per second. Two 2.65MW industrial heat pumps use ammonia as a working fluid to harness the ambient heat  of the river water (typically between 6-12°C) delivering it up to 80°C. Hot water is then supplied via a 2.5km pipe network to heat residential and commercial buildings across the 23-hectare flagship development.

Scott Lutton, Operations Director for Vital Energi, said “We’re delighted for West Dunbartonshire Council and the wider team for this award win. It’s a truly great achievement, putting water source heat pumps and heat network schemes at the forefront of the road to net zero. Working collaboratively with West Dunbartonshire Council highlights how effective these partnerships can be and we look forward to growing the network further.”

Dave Pearson added: “Utilising water as a renewable energy source for heating has a long list of benefits compared to burning fossil fuels. From 2025 there will be a national ban on gas heating for new homes, which means building developers and local authorities need to start exploring low carbon options.”

“The challenge is bigger though as all existing buildings must decarbonise too. Industrial water source heat pumps have the ability to transform the way the UK generates low carbon heat. Any buildings (new or old) connected to a renewable heating network such as Clydebank’s will be achieving emissions approximately 80% lower than burning gas.”

“For existing buildings there is no simpler way to meet their decarbonisation obligations. The only barriers are a lack of policy to allow local authorities to force buildings to achieve reductions.

Realistically, inner city decarbonisation is only achievable with district heating so this must be compulsory. Additionally, electricity policy (that currently adds 200 to 300% to the cost of generated power even if used for a heat pump) must be reversed so that the costs are lower.”

Star believes there is extraordinary potential for water source heat pumps to be deployed in various locations across the UK. In England alone, it is estimated that more than 6GW of renewable heat can be extracted from rivers and canals. The long coastline of Wales and Scotland also offer potential for heat pumps to extract further heat from the sea.

Inspired by the success of the Queens Quay project, many local authorities are now looking to invest in large scale district heating systems. Star Renewable Energy and Vital Energi are already currently working with other clients and local authorities to help them achieve their vision and develop further district heat pump projects in the UK.

SRE focused on large (>500kW), high temperature heat pumps ( >60C and up to 85C). SRE was set up to support the decarbonisation of the heating sector by delivering large heat pump systems for district heating and industrial processes. Star’s large heat pumps, Neatpumps, have enough capacity to supply large buildings and entire cities with both district heating and cooling at lower cost and less carbon emissions. When using renewable electricity, Neatpumps generate heating and cooling with zero CO2 emissions.