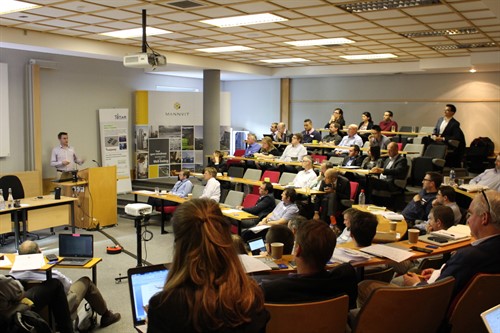 SRE named alongside three other candidates at Scottish Green Energy Awards 2018. The awards ceremony is  scheduled to take place tonight at the Edinburgh International Conference Centre.

Star Renewable Energy (SRE) has been nominated as a finalist for The Scottish Green Energy Awards 2018 in the Champion of Renewables Award category. The prize is given to “organisations that have most effectively communicated the benefits of renewables or informed the debate on Scotland’s energy”.

In a society dominated by clean electricity and transport dialogue, SRE’s short-listing is recognition of their commitment to the larger challenge of clean heat. Using world leading natural heat pump (Neatpump) technology which the company has further developed, its endeavours in raising awareness about the issue of carbon emissions and sharing knowledge about practical solutions with the wider community had begun long before clean heat became the key challenge area across Europe.

The Scottish Green Energy Awards is a highly-anticipated event in the Scottish renewable energy industry’s calendar. Showcasing the very best in renewables, the event honour the people, organisations and communities going above and beyond to shape the industry’s future.

Dave Pearson, Director of Star Renewable Energy, said, ““We are thrilled to be nominated for The Champion of Renewables Award.

For the last decade, our business has invested in developing the clean heat segment using heat pumps. Whether helping policy makers, consultants, university academics, students as well as end users, our mission has been to spread the word about what sort of 2040 and beyond we believe is required and how this can realistically be delivered. Others have done a fine job in promoting clean electricity and Scotland leads Europe in this area but across the world it’s now seen that we need a thermal energy focus – cooling as well as heating- that doesn’t pollute our global and local environment.”

“From the beginning in 2008, we pushed to educate the younger generation on the importance of safeguarding our planet.  In schools, this has taken the form of participation in STEM events, while in universities, SRE has mentored undergraduate projects, master’s theses and lectured. In the wider community, SRE have worked with local authorities and industry professionals, organising knowledge-sharing events such as the conference at Warwick University in 2016, and The University of Glasgow/ Scottish Renewables in 2014. These events brought together over 400 manufacturers, researchers, end-users and environmentalists to discuss the steps necessary for a smooth transition to a zero-carbon heating future. These events were promoted and subsidised by SRE with a cost of over £1.5 million.”

Chris Stark, Chief Executive, Committee on Climate Change, said “Star have been promoting an achievable solution to the clean heat challenge since 2008. They are a reminder that there is genuine commercial opportunity in decarbonising heat, an essential message that has been heard by policymakers in Holyrood and Westminster. Thanks to Star we are all better informed on the practical and strategic challenges – and in the Drammen project we can point to a real example of cleaner heat on a city scale; using river source heat pumps.”

SRE was established five years ago, after its parent company Star Refrigeration became aware of the fact that sustainable heating would become a focal point of the fight against climate change all over the world and needed to ‘double down’ on their commitment. Pearson’s role changed from Group Director of Innovation to a more deployment focussed business unit director.

Heating is estimated to account for over half of Scotland’s total energy consumption and just under half of its greenhouse gas emissions, making it a key area of concern. While there are many different technologies available district and industrial heat pumps could be key to transition to a zero emissions Scotland by 2050. Heat pumps do not produce local combustion products – a weakness seen in other form of energy from waste incineration and biomass solutions. Other technologies such as gas CHP, which are the backbone of many district heating schemes adopted by several British hospitals and universities, have a rising CO2 footprint on a decarbonising electricity grid and emit high levels of NOx and other contaminating particulates.

SRE recognised the need for better, warmer heat pumps and improved their viability by replacing HFCs with the naturally-occurring gas ammonia. With no deleterious effects on the ozone layer and zero global warming potential, ammonia represents an abundant and environmentally-friendly alternative to HFCs which had, until recently, not been used in heating applications.

The resulting product is the Neatpump. A high-efficiency, large water source heat pump for district heating to meet the heating needs of Drammen, Norway, where the plant’s hydroelectric nature, coupled with the Neatpump’s unique use of ammonia, make its emissions virtually zero. The success of the Drammen site demonstrates the effectiveness of the technology on a city-wide scale, and further Neatpump projects are already at the development stage across the UK. The Scottish Government has supported feasibility studies on several sites including The University of Glasgow, The Gorbals, Queen’s Quay in Clydebank and several others. Other schemes have supported assessments from as broad a range of locations as Shetand Heat and Power, Iona Community, Aberdeen Heat and Power, Perth, Highland Council, Jubilee Hospital and many more. All can trace their direction of travel to the work of SRE.

The Scottish Green Energy Awards is scheduled to take place tonight at the Edinburgh International Conference Centre where more than 1,200 industry professionals will be in attendance. The prestigious event celebrates companies like SRE and individuals, who have striven tirelessly to promote renewable sources of energy to fight climate change.